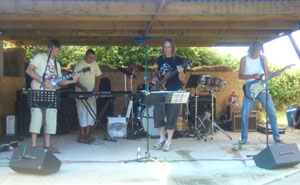 Three or four years back, my good friends Kevin and Carrie decided to hold a bash at their place to celebrate Kev hitting a milestone birthday (I won't tell you which but, but he IS a grandad now so do the math yourself). The gig was so much fun that it has become an annual event and it's always a red-letter day in my calendar.

Kev and Carrie live in a farm cottage, a fair way from the madding crowd, where they are surrounded by fields. They also have a huge, shady garden complete with BBQ area and plenty of room for a fire. In short - it's a cracking spot for pretty much any outdoor get together ... but especially for one like this.

Kevin is a keen musician, who currently plays in a band called FuZed, with a great bunch of lads and they provided the main entertainment of the day.

Kev has also played in a fair number of bands over a larger number of years ... as have a hefty number of his friends (not to mention his two sons Kieren and Tristan, who are no mean performers themselves). Add it all up and you have a recipe for a BBQ from rock 'n' roll heaven.

After weeks of hot, dry weather I was gutted to hear the sound of heavy thunderstorms, early on Saturday afternoon. But the rain petered out around 3, leaving a cool and pleasant breeze for the rest of the day. The rain also damped everything down nicely, which helped keep the midges to a minimum. Bonus. 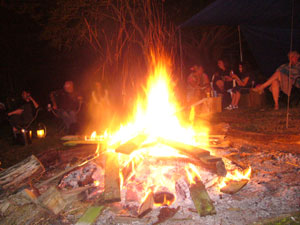 The crowd were brilliant as always. There was an excellent mix of familar faces and new friends (one or two even travelled from as far away as Spain and Sierra Leone to be there). As always, Kev and Carrie provided a fantastic spread of freshly-made salads and other accompaniments. Soon the burgers and sossies were sizzling...

By 6pm with a fair few beers sunk, everyone was in fine form and the place was rockin! The lads (and a good number of guest performers) played off and on through the evening, right up until 11pm. The set list was too long to quote here, but included a huge range of old and new favourites. If it rocked - it was played.

Around 11, the lads finally collapsed gratefully into nearby chairs as we got the bonfire going and began playing acoustic through into the wee hours...

One of Kevin's oldest friends is Brian. Brian had come over from the Canary islands where he works as a professional musician and even after playing with the band for most of the day, he was still keen to play a set around the fire. Brian is a superb guitarist and an extremely tough act to follow (so - very wisely - I didnt!) and he kept the crowd entertained well past the witching hour.

As the fire soared skyward, I listened to Brian play as I watched the fire's golden sparks rise up to meet the silvery light of the stars overhead. It was nothing short of sublime. 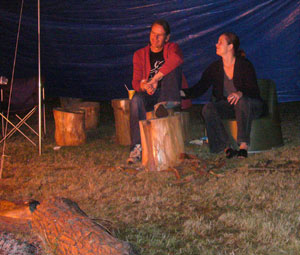 We carried on through the night and deep into the wee hours, taking turns to play, drum or sing. As the night wore on, some people began to drift away to their tents while others made themselves comfortable by the fire and slept out under the stars.

Poor Kevin and Carrie were rushed off their feet, with one thing and another, most of the day and while the rest of us mortals all tried to do our bit to help, theirs was an effort of Olympic proportions! They finally got the chance to take the weight off a little and relax, late in the evening.

Shortly before 5am, I said goodnight and headed back to a makeshift bed in the back of my car (in hindsight, I should have just crashed out in front of the fire, but there you go).

I'm pretty sure Kevin and Carrie won't mind if I take this opportunity to thank them - on behalf of everyone there - for a fantastic evening!

All in all, this gig (and it's four predessors) has rightly earned it's place on the Bandanna Club website - together with a rating of a full five bandannas.