In early March, I took a break from a busy work schedule to check out this years "Big Gigs". Even without Glastonbury, I was fairly impressed with the range on offer. But one particular gig fairly jumped off the screen...

This gig had a great line-up...Pink Floyd's Roger Waters and Nick Mason performing tracks from "Dark Side of the Moon" on Saturday (with Texas as a main supporting act) followed by The Who on Sunday, supported by Primal Scream.

It had been awhile since I last got out to a major gig and other than one visit to Wembley to see the Stones back in the 90's, I'd never attended a large gig in London. Hyde Park looked like just what the doctor ordered. A weekend pass was duly booked and a reasonably priced hotel near Hyde Park located.

Saturday morning was warm and dry and by the time I had made my way into London and checked into the hotel (and climbed the 60+ stairs to get into a tiny but serviceable room) it was blisteringly hot and humid. I catch up with two old friends and the 3 of us head down to a local pub for a few beers and to keep half an eye (or less!) on the England/Portugal match.

By 6pm the match is over and we are saying our goodbye's and shortly after 6:15 I made my way through the park, towards the event gates, my ticket clutched tightly in my hand. No pat-down (I'm not carrying a bag) and after checking the barcode on my ticket, I'm through the gates and into the venue itself.

In the distance I hear Texas in full swing and my pace quickens slightly.

It's still a bit sticky but cooling rapidly under a crystal clear sky. I get my bearings and note a few easy-to-spot landmarks, before finding a good position on the edge of the crowd. Shortly after 7:30, the main event of the evening begins.

Roger Waters comes on stage initially and together with legends such as Snowy White on guitar and Ian Richie on Sax, performs a series of classic Floyd tracks including "Wish you were here", "Have a Cigar", "Shine on you crazy diamond" (without Gilmour's signature intro it was noted) before moving into "The Fletcher Memorial Home" and "Vera" from the Final Cut. 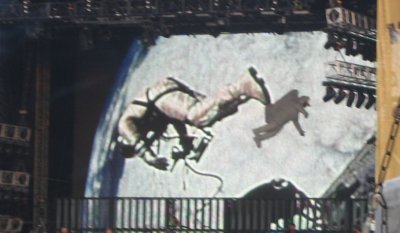 One or two tracks from his solo works: "Pros and Cons of Hitchiking" and "Amused to death" followed, supported by the angelic vocals of Katie Kissoon, PP Arnold and Carol Kenyon.

A short break ensues and during the break I get talking to the chap next to me, who is obviously a major Floyd fan. His name is Andy and we quickly discover that we are both at the gig alone. We swap phone numbers and agree to mee up the next day.

The second part begins with a huge roar from the crowd as Nick Mason walks onto the stage and takes his place behind the drum kit.

They begin with "Breathe" and work their way through all the major DSM tracks, including "Time", "Irish Dawn","Money", "Us and Them" and finally "Brain Damage". Each is better than the last, building to a climax where jets of flame fire skyward from the top and front of the stage. The heatwave from the jets of flame rolls over the crowd roars its approval.

Before the performers have even left the stage, the crowd is roaring it's approval and chanting for an encore. Roger and Nick oblige with "Another Brick in the Wall" and the crowd go wild!

In the aftermath, as the crowd begins to disperse, Andy and I exchange mobile numbers and agree to meet the following day.  I make my way unsteadily to the gates and then promptly head off in the wrong direction. After doubling back on myself, I eventually find a familiar landmark or two and trudge back to the hotel. 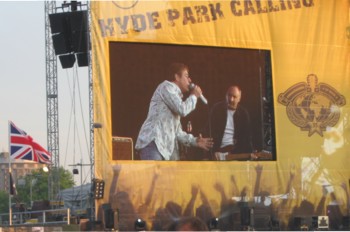 Roger Daltry and Pete Townsend of The Who
Hyde Park London, 2006
Photo: P.McKenzie

Around 9am, I regain consciousness and by 10am I'm out and about. I take a stroll up to Edgeware road but the heat is already becoming stifling and by 2pm I'm back at the hotel with the air conditioning on full blast.

Around 5, I head back to Hyde Park, in time to see Primal Scream and to catch up with Andy.  We find a beer tent that does real ales and a shady spot under a tree to enjoy a pint.  I grab an obligatory t-shirt between beer runs and around 8, we wander towards the stage to get ourselves a good position.

The Who's Roger Daltry and Pete Townsend take the stage and proceed to deliver a performance that can only be described as "electrifying". From tracks such as "The Seeker" and "Who are you?", through to "My Generation" and "Pinball Wizard" as an encore, the performance was unfaultable and the crowd loved it.

I literally floated back to the hotel...

All in all, this gig has earned it's rating of a FULL FIVE BANDANNAS and I for one am already looking forward to next years gig.