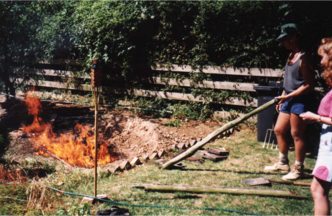 Fire in the hole!
Photo: P.McKenzie

A Hangi (for those not in the know) is a traditional Polynesian/Maori style banquet of meat and root vegetables ... cooked in the ground.

In 1995, I decided to hold a hangi at my place in Basingstoke. To that end, I contacted a bloke called Andy, whose Aunt worked in the NZ Embassy.

Andy had done several hangis before, both for his family and for friends and colleagues and he agreed to do one for us, if we could pitch in and give him a hand.

So, on a hot Saturday afternoon in August 1995, we started (about 1:30pm) by digging a hole in the back garden aprox 2 feet deep, 3 feet long and two feet wide (in between swatting the wasps that were all over the place at the time).

The hole was filled with wood and a fire started. As the flames died down, we placed some tractor-weights and railway ties (traditionally river stones are used, but the ones here in England are too brittle and tend to crack. Sometimes In NZ the best stones are passed down through the generations as family heirlooms). Wooden slats were placed over the mouth of the hole and a second fire was started on the slats. 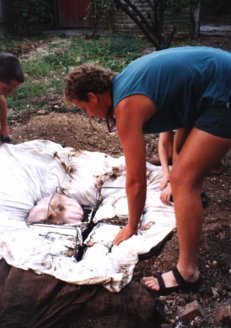 Andy opens the pit & lifts out the hangi
Photo: P.McKenzie

These eventually burned through and the hot embers then collapsed into the pit, effectively "sandwiching" the metal weights and ties in a bed of red-hot coals. We waited about an hour until all the metal in the pit was almost red-hot.

The weights were hooked out of the hole with metal hooks and put aside. The next step is the hardest; All the coals have to be shovelled out of the hole and believe me it is HOT work (we filled a large bin with water and soaked towels in it, then doused ourselves with water and proceeded to take turns at leaping into the pit for a few seconds to shovel frantically before the heat overcame us and we were forced to leap out again).

Once the pit was clear of coals and debris, the metal weights and ties were returned to the pit and sprinkled with water to make them steam. Hessian sacking was then soaked in water and laid out in the hole.

The food (a leg of lamb, a couple of chickens, half a turkey, a joint of pork plus potatoes, sweet potatoes, carrots and corn-on-the-cob), which we previously wrapped in foil and placed in a metal shopping basket (minus the plastic handles of course), was then wrapped in an old sheet and placed on top of the Hessian sacking.

Finally, the Hessian sacking was carefully wrapped around the basket and then the pit was filled with earth. Careful "tapping down" is required to avoid steam escaping and a round-the-clock vigil has to be kept for about 5 hours. 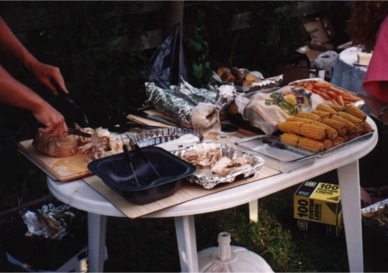 A taste of New Zealand - in Basingstoke
Photo: P.McKenzie

At aprox. 7:30pm that evening, we gathered together to check out our handiwork...and up from the hole came the best meal we've had in a long time.

Cooked to perfection. The meat is tender and literally falls off the bone and vegetables cooked this way have a lovely spicy taste (the sweet potatoes add a unique flavour to everything). All that's left to do is add a little garlic bread and salad, and serve with an ice-cold beer.

It's an interesting experience, cooking for 50+ people. But everyone pitched in and we had a great day.

We partied on through most of the night and a good time was had by all. The neighbours were quite bemused by our rendition of the Kamate Haka too!