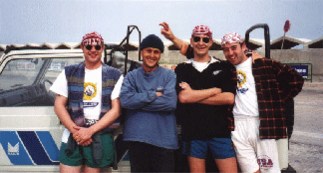 In 1995, I was invited to attend a Martial Arts Seminar in Malta. Since the seminar was only for a day or so and I was going to be in Malta for a week, I spoke to Tosh and Andy about the idea of learning to dive, while in Malta. They were both keen to have a go and Andy suggested the possibility of doing some abseiling while we were there also. Su also came along as she had never been to Malta before.

So, in October, 1995, weighed down with luggage, abseiling gear, my Martial arts stuff and some sense of trepidation, we all hopped on a 4-hour flight to St. Julians Bay in Malta.

The night we arrived was Tosh's birthday and we celebrated with a pint or 20 in the local Hard Rock Cafe (You can't pass up the chance to drink in a bar that has a sign on the door reading: 'No drugs or nuclear weapons allowed inside!')

In the wee wee hours the four of us staggered back to the hotel, singing at the top of our lungs ... until a local cop stepped out of the shadows and hitched up his belt in a manner that suggested that we would very soon become very familiar with the local constabulary if we didn't shut up. Fortunately we kept moving and after a few seconds I think he re-evaluated the situation based on the amount of paperwork he would probably have to complete and decided to retire to his comfy seat in the corner with his paper and a smoke. Thank heavens for small mercies.

While the others slept off the worst of their alcoholic after-effects, I was forced to sweat mine out by being repeatedly used as a throw-dummy onto a marble floor at the seminar I was attending the following morning (something I still haven't forgiven them for!) but by around 2:00pm the worst had past and that afternoon, after hiring a small Japanese jeep with dodgy brakes and a knackered starter motor (the only way to see Malta), we sorted out the diving and prepared to begin our PADI open-water course the following morning.

We did our PADI course with a company called Divecare, who are based in St. Julians Bay in Malta. They offer competitive rates and the 5-day course that we signed up for was very in-depth and a lot of fun. Su spent this time sunbathing back at the pool, and generally chilling out; when she wasn't helping us with our diving homework and revision. 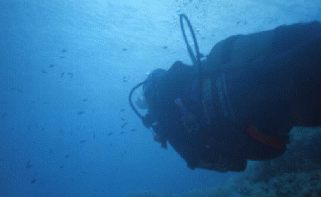 Out of the black ... and into the BIG blue!
Photo: P.McKenzie

As an introduction to diving, Malta takes some beating. The waters are calm and visibility is pretty good. The sea life is not bad, but some of the waters have been heavily fished out. Nevertheless it was a fantastic experience; so good that we came back in 1996 with new Bandanna Club members to do our Advanced Open Water Papers.

In 1996, We returned to Malta, with our new Bandanna club members, Triona, Rebecca and Tosh's brother Craig. While Craig and the girls did their PADI Open-water course, Tosh, Andy & I embarked on our Advanced Open-Water course. The Advanced course is only 3 days instead of 5 but was just as intense. The highlight of our course was a fantastic dive at the Comino caves, which is regarded as one of the best dives of it's kind in the world.

A local instructor by the name of Kim Harrison, who also does professional videography, joined us for the day and shot a 15-minute video of the dive at Comino, complete with an excellent soundtrack and all the trimmings. I've lost count of the number of times I've hauled that video out of the cupboard and shown it to friends who are interested in giving this excellent sport a go; best way to give people a taste of what it's like by far.

As well as the diving, we had also checked out Malta a bit more this time around, including a trip to the Capital Valetta and had a fantastic meal at a small restaurant in a tiny fishing town, right over the other side of the island.

You can now view a selection of streaming video clip(s) featuring Andy, Phil & Tosh diving at the Comino Caves in Malta.

If you have RealPlayer G2 (or a later version) installed as a browser plugin, you can view one or more of the clips listed below, as streaming video online.

If you have a slow modem (up to 56K non-ISDN), we recommend you select entries from the list directly below.

For users who have access to faster modems (such as ISDN lines or Corporate LAN access) we recommend you select entries from the list directly below.